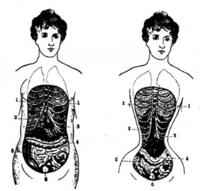 At my request, Kelly has submitted the following provacative article. I hope it will arouse reactions, comments and thoughts that you will share. Kelly is the Editor-in-Chief of the International Journal of Yoga Therapy, and is also one of the presenters at The Future of Breathing, the symposium I’ve organized at Kripalu September 8-11.

I recently came across an article from 1905 that dispelled a popular breathing myth of the time: that women naturally breathe differently than men. In the late 19th and early 20th centuries, it had been observed that men breathed “into the belly” (with the diaphragm and abdominal muscles), whereas women breathed shallowly into the upper chest and rib cage. As with any observed differences between men and women, it was tempting to attribute these breathing differences to some basic biological cause. Tempting, but wrong.
Perhaps you have already guessed the primary source of the observed breathing differences. Corsets, which dramatically restricted abdominal movement, forced women to find alternative strategies for breathing (a problem that some corset manufacturers attempted to address by developing corset braces called “lung expanders”).

Corset-free, one would expect women to breathe freely and deeply, using the diaphragm. The authors of the 1905 paper reported that women who had not been raised to wear corsets breathed identically to men: diaphragmatic contraction and abdominal expansion. More amusingly, but unsurprisingly, they found that men in corsets demonstrated the stereotypical female breathing pattern of chest expansion.

What does this lesson from history have to do with current research on breathing? Some social pressures may have changed (women no longer wear corsets), but other pressures have emerged to create much the same effect on women’s breathing.

In my work as a breathing educator, I have noticed a disturbing pattern: many women are still breathing as if they were wearing a corset. In particular, women report shallow breathing and frequent breath-holding. This tendency has been called the “inhibited breathing pattern” by some researchers, and it is more common in women than in men. It is associated with chronic stress, anticipatory fear (being afraid of something that hasn’t happened yet), being on the bottom of the social power totem pole, and a reluctance to express anger.

If inhibited breathing is a response to feeling overwhelmed and powerless, it is not surprising that more women than men would demonstrate the inhibited breathing pattern. Women are more likely than men to try to avoid conflict or disappointing others; they are also more likely to feel powerless in work and social situations. This leaves the “freeze” response as the most likely reaction to stress – and with it, the habit of breathing shallowly and holding the breath. Unfortunately, the inhibited breathing pattern only reinforces the feeling of being overwhelmed and powerless – and it is associated with harmful health outcomes, such as chronic hypertension.

Women may be free of literal corsets, but many of us feel the pressures of a psychological or social corset that restricts our breathing. Breath education is one way to counteract learned breathing tendencies and fear responses. I teach a technique called empowered breathing: powerful diaphragmatic breathing that creates a sense of peace and purpose. Empowered breathing cannot change all of the pressures that women face, but it can transform our experience of – and reaction to – those pressures. In many cases, the pressures women face are self-imposed – based on our own beliefs about what we are capable of, or what is appropriate behavior. Breathing deeply is a way to reject those beliefs, and to build a new habit: feeling capable to meet any challenge, and powerful enough to do as we please.

Descriptions of research on inhibited breathing in women: http://www.ncbi.nlm.nih.gov/entrez/query.fcgi?cmd=Retrieve&db=pubmed&dopt=Abstract&list_uids=12360838&query_hl=36

Kelly McGonigal, Ph.D. is a health educator and yoga teacher at Stanford University, and the Editor-in-Chief of the International Journal of Yoga Therapy.

9 comments on “The Politics of Breathing: Still Liberating Women, After All These Years? By Kelly McGonigal”