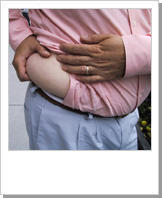 I’ve been tracking this story since it first appeared as a press release for PRNewswire on July 19th. Almost immediately, it was picked up by both major and minor news outlets, and within 5 days, it had made about 6 hits to my inbox.

Nothing more appeared until yesterday, when it exploded for 10 more hits within 24 hours. When the latest one came in from Pravda, I just had to post something on it.

The phenomenal amount of interest in how yoga practice can prevent weight gain in middle age should be taken as a very clear sign of where, as a profession, yoga’s demographics are heading.

Since the original piece was a press release, I can reproduce the whole thing for you below, along with a link to the originator of the study, “Alternative Therapies in Health and Medicine,” a peer-reviewed journal.

– Plus sidebar: Yoga tips that may encourage weight maintenance or loss

SEATTLE, July 19 /PRNewswire/ — A new study led by researchers at Fred Hutchinson Cancer Research Center has found that regular yoga practice may help prevent middle-age spread in normal-weight people and may promote weight loss in those who are overweight.
The study — the first of its kind to measure the effects of yoga on weight — appears in the July/August issue of Alternative Therapies in Health and Medicine.
Funded by the National Cancer Institute, the study involved 15,500 healthy, middle-aged men and women who were asked to complete a written survey recalling their physical activity (including yoga) and weight history between the ages 45 and 55. The study measured the impact of yoga with weight change, independent of other factors such as diet or other types of physical activity.
The researchers found that between the ages of 45 and 55, most people gained about a pound a year, which is a common pattern as people age and do not adjust their caloric intake to their declining energy needs. “However, men and women who were of normal weight at age 45 and regularly practiced yoga gained about 3 fewer pounds during that 10-year period than those who didn’t practice yoga,” said Alan R. Kristal, Dr.P.H., the study’s lead author. For the study, regular yoga practice was defined as practicing at least 30 minutes once a week for four or more years.
But the researchers noted the greatest effect of regular yoga practice was among people who were overweight. “Men and women who were overweight and practiced yoga lost about 5 pounds, while those who did not practice yoga gained about 14 pounds in that 10-year period,” said Kristal, a member of the Hutchinson Center’s Public Health Sciences Division and a professor of epidemiology at the University of Washington School of Public Health and Community Medicine.
What accounts for yoga’s apparent fat-fighting potential? Kristal, himself a longtime yoga student, suspects it has more to do with increased body awareness than the physical activity itself.
“During a very vigorous yoga practice you can burn enough calories to lose weight, but most people don’t practice that kind of yoga,” he said. “From my experience, I think it has to do with the way that yoga makes you more aware of your body. So when you’ve eaten enough food, you’re sensitive to the feeling of being full, and this makes it much easier to stop eating before you’ve eaten too much.”
Study co-author Denise Benitez, owner of Seattle Yoga Arts, agrees. “Most people practice yoga in a way that’s not aerobic enough to burn a lot of calories, so it has to be some other reason.”
One reason, she speculates, could be that yoga cultivates a form of gentle inner strength. “When we practice yoga, although it may look easy, there is some mild discomfort. You bring your body to a physical edge that’s just a little bit challenging. And people who regularly practice yoga develop the inner resources to stay with a little bit of discomfort. They develop a softness inside and an ability to stay mindful. So that when you go home after yoga class and open up the fridge and see a chocolate cake, you have the resources to stay with the discomfort of not eating that chocolate cake.”
Whatever the reason behind the apparent impact of yoga on weight maintenance and loss, Kristal stresses that these findings need to be replicated.
“I think it’s time now to do a carefully controlled, randomized clinical trial to see if adding yoga to a standard weight-loss program can help people lose more weight or keep it off longer. The other message, particularly to people who might be overweight, is that yoga is a noncompetitive activity. It’s something that everybody can do. It brings so many benefits, and if one of the clinical benefits is that it can help you control your weight, then that’s a great thing.”
The participants in the yoga study were part of a larger ongoing Hutchinson Center study involving more than 75,000 residents of western Washington called the Vitamins and Lifestyle, or VITAL, study. This $4.2 million project, which began in 2000, aims to determine whether vitamin, mineral or herbal supplements reduce the risk of cancer.
SIDEBAR
YOGA TIPS THAT MAY ENCOURAGE WEIGHT MAINTENANCE OR LOSS
Study co-author and yoga teacher Denise Benitez, owner of Seattle Yoga Arts, offers the following suggestions for enhancing one’s yoga practice. These tips may be particularly helpful for those who wish to maintain or lose weight:

1. Practice in a room without mirrors, and pay more attention to your
internal experience than to your outer performance.
2. Learn to feel sensations more and more subtly, so that you become
deeply involved in and curious about small movements, sometimes called
micro-movements.
3. In your poses, find an edge for yourself where you are challenged but
not overwhelmed. At this edge, practice maintaining a clear, open and
accepting mental state.
4. Give yourself permission to rest when you feel overworked.
5. Pay close attention to what you are saying to yourself as you
practice, and make an intentional effort to appreciate your own
efforts and innate goodness.
6. Go to class faithfully, arrive early, and talk to a few people in your
class before class begins.
7. Buy your own yoga mat and bring it to class.
8. Realize that the development of qualities like patience, discipline,
wisdom, right effort, kindness, gratitude and many others will arise
from your yoga practice. These qualities create a steady and soft
mind.
9. Find a teacher who offers a balance of gentleness and firmness and
whose teaching inspires you to practice from your highest self.
10. Recognize that simply attending class is a major statement of
courage, self-care, and positive momentum. Realize that you are
inspiring others as you become more true to your deepest desires.
At Fred Hutchinson Cancer Research Center, our interdisciplinary teams of world-renowned scientists and humanitarians work together to prevent, diagnose and treat cancer, HIV/AIDS and other diseases. Our researchers, including three Nobel laureates, bring a relentless pursuit and passion for health, knowledge and hope to their work and to the world. For more information, please visit fhcrc.org.