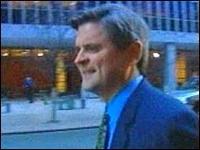 NEW YORK (CNN/Money) – Former America Online Chairman Steve Case is investing $20 million in a producer and distributor of yoga and Pilates videos, according to a published report.

The Washington Post reports that Case is going into business with Jirka Rysavy, chief executive of Gaiam Inc., who the paper reports lives in a cabin in Colorado without indoor plumbing. The newspaper said the investment is the latest one by Case associated with a new-age lifestyle in the belief they are going mainstream.