I’m departing from the usual fare to share something a bit more personal today.  File it under #father_son_geekiness.

This story will make a lot more sense if you, like me, are a Game of Thrones fan. 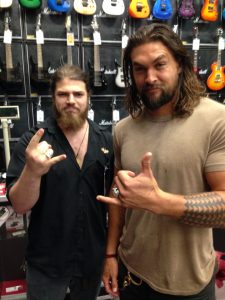 My son Jai, who lives in Los Angeles and works at the Hollywood Guitar Center store is a huge GOT fanboy – in fact, he’s planning to dress up for Halloween as his favorite character from the show, Khal Drogo. As part of Jai’s job selling and repairing guitars, he occasionally gets to rub elbows with celebrities, so you can imagine his reaction when, last year, he found himself next to none other Khal Drogo himself, Jason Momoa.  Now, Jai is six feet tall, so that will give you a sense of how large a person the 6’4″ Jason is.  Jai was beside himself with joy at meeting one of his idols.

Fast forward to this week, when, during a phone chat Jai tells me how bummed he was that he wasn’t on duty at the store when an even taller cast member of the show 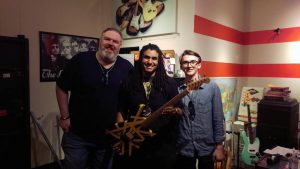 showed up in tandem with his young co-star.  Yes, it was none other than Hodor (6’11” Kristian Nairn) and Bran Stark (Issac Hampstead Wright).  Jai’s co-worker (in the middle) sent him the photo.

Hodor and Bran were recently at the center of one of the most powerful, devastating episodes in all six seasons of the show.  Jai was truly sorry to miss meeting them.

So, I was thrilled to get a text the next day from Jai saying that Issac (Bran) was in the store again.  I’ll show you a screenshot of the actual text exchange below, which just tickled me, and prompted me to write this post as an example of shared father-son  geekiness.

If you don’t get the reference, I can’t really explain it – you’ll just have to binge watch all six seasons of Game of Thrones.