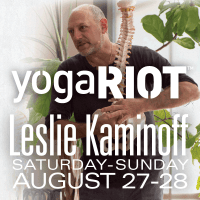 I’m thrilled to report on my upcoming weekend of teaching for Annie Ory and her team at a new Baptiste studio in Portland, OR, yogaRIOT, located on the second floor of an old Masonic Hall on SE Milwaukie Avenue.

HISTORICAL DIGRESSION (I promise this will come back around to yogaRIOT PDX): Yoga on the second floor of a beautiful Masonic hall reminds me of the Center for Yoga, which started life as the original site of the Sivananda Community in Los Angeles. It was established by my old friend Ganga White at a nearby book warehouse on Larchmont Ave.  When Ganga parted ways with Swami Vishnudevananda in the 70’s he re-named his space “The Center for Yoga,” and moved it to its present location, where it became not only the most beautiful yoga space in town, but a hotbed of teaching innovation – including early visits from B.K.S. Iyengar, Pattabhi Jois and a precursor to Acro called “Double Yoga,” which Ganga pioneered with his then-partner Anna Forrest.  The Sivananda community relocated to Hollywood (McCadden Place), and then to West Hollywood (Sunset Blvd.), where I assumed directorship in 1981.

Following historical strands, Ganga White, Baron Baptiste and I (among many others) intersected 7 years later at the 4th Unity in Yoga Conference at Murrieta Hot Springs, CA. That 1988 conference was significant for me as it began my involvement with Unity in Yoga, the group that eventually turned into The Yoga Alliance, and was the year I first met my teacher Desikachar, and became his student. 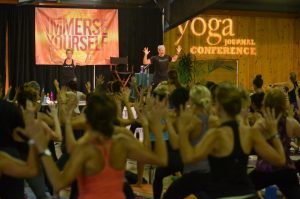 In September 2011, 23 years later, I was present at the 16th Annual Yoga Journal Conference at Estes Park, CO during the Baptiste Power Flow Immersion where I became acquainted with some of the teachers and senior leaders of Baptiste Yoga, including the delightful Paige Elenson, founder of the Africa Yoga Project – which began a fruitful relationship with her program, donating my online course for use in her teacher training. Throughout the Estes conference, I was struck by how refreshingly grounded, sensible and straightforward the Baptiste crowd seemed.

As much as I relish any opportunity to tell a story and share some history, the main point here is that the yogaRIOT space looks beautiful and welcoming and, if my previous experience with the Baptiste community is any indication, I anticipate finding the same in the community. Since Baron lists my teacher Desikachar as one of his influences, I am eager to explore common connections during this weekend exploration of breath-centered, individualized yoga asana practice August 27 & 28. I hope to see a bunch of you there!