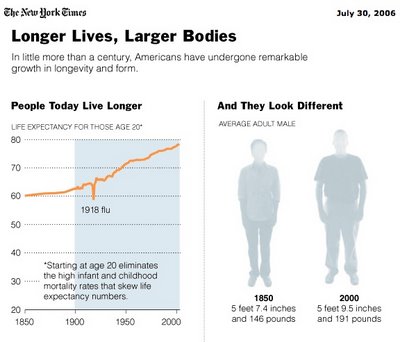 From the New York Times article: New research from around the world has begun to reveal a picture of humans today that is so different from what it was in the past that scientists say they are startled. Over the past 100 years, says one researcher, Robert W. Fogel of the University of Chicago, humans in the industrialized world have undergone “a form of evolution that is unique not only to humankind, but unique among the 7,000 or so generations of humans who have ever inhabited the earth.”

This is an important perspective to keep in mind the next time you hear someone go off on a rant about the evils of industrialization. The fact is, we are so well-nourished and cared for from conception to 2 years of age, that as a society, we are growing taller, getting heavier, living longer, and are much less likely to suffer from chronic diseases. The care that even our most impoverished citizens have access to is far superior to what was available to even the wealthiest people 100 years ago.

Posted in Uncategorized No Comments