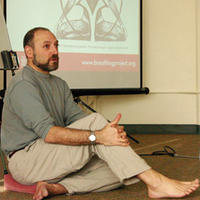 This is an interview I did for the Summer Kripalu catalogue. It contains some of my personal history relating to my beginnings in Yoga, and my interest in breathing. I was quite pleased with the way it turned out, although I don’t think the photo is very flattering.
What first got you interested in the breath and breathing?
I had been teaching yoga for about three years and I was talking to a good friend of mine, Larry Payne. He had just returned from a trip to India to study with the top yoga masters. He had been most impressed by the teachings of T.K.V. Desikachar in Madras; I asked him what made that approach so special. He said only five words to me: “It’s all in the breath.”
Those words made such an impression that by the time I met Desikachar in 1987, I had been engaged in a 5-year inquiry about the role of breathing in yoga practice…

If you could share one idea about the breath, what would it be?
That there’s no right way to breathe. The goal of yoga and breath training is to get the breath freed up; and if you want to be free, the first thing you have to get over is the notion of trying to get it right.
What is the mission of the Breathing Project?

To educate yoga teachers and the general public about the role of the breath in health, well-being, and spiritual awareness. We teach advanced studies programs, sponsor charitably funded community yoga classes, and have a regular schedule of breath-centered group yoga classes featuring some of the finest teachers in New York City. We also have a studio, run by my wife, Uma, in South Egremont, Massachusetts called The Berkshire Breathing Project that has a full schedule of classes and advanced studies programs.

Tell us about your first yoga class.

My dad was studying yoga at the Sivananda Yoga Vedanta Center here in the city, and he invited me to a class. It was 1978. I was 20 years old and already living on my own in the East Village. What I remember most was the feeling of complete relaxation in the final shavasana at the end of class. It was a completely new and transformational experience for me. Soon after that, I signed up for a beginner’s course and by the next summer I was taking the Sivananda teacher training course in Canada. Within two years, I was an initiated swami, running the Los Angeles Sivananda Yoga Center on Sunset Strip. You see, a little relaxation can be a dangerous thing.

3 comments on “Celebrating the Breath, an Interview with Leslie Kaminoff”