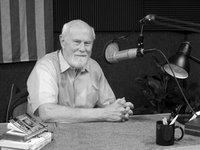 If you practice Yoga, Dave Hunt is very concerned about the welfare of your soul – especially if you are a Christian.
He has authored a thoroughly researched book called “Yoga and The Body of Christ” that irrefutably proves that the practice of Yoga is a form of Eastern mysticism that opens you up to the influence of demonic forces.

Here’s a link to a PDF of the first 19 pages of his book. It’s scary stuff, but not for the reasons that he intends. I’ll let Hunt’s own words speak for themselves, as there’s nothing I could say that more clearly conveys his message. It’s very revealing to hear him state, as if it’s a self-evident given, that Christianity in this country is under serious attack from Eastern traditions, when it’s pretty clear to any semi-rational observer that the exact opposite is true. Christianists in the U.S. are on a serious crusade that seeks to undermine state-church separations, and use government force to impose their religious values on the rest of us non-believing heathens.

All in all, Hunt’s rantings are a disturbing peek into the mentality driving the smugly self-righteous religious right in this country. I’m curious to hear your comments on this issue. Also, check out the archived e-Sutra post “Christians Debate Yoga” from June 30, 2005.

One comment on “Author Enlightens Christians About Yoga’s Demonic Influence”