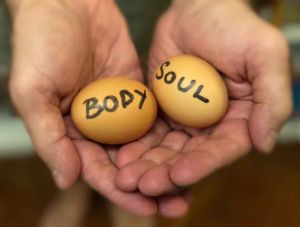 You know those Facebook quizzes…the ones that ask a bunch of questions and then deliver what is supposed to be some insightful truth about you, which you’re then supposed to post for all the world to see? I hate those. If you invite me to take one (or to play Candy Crush) I will unfriend you.

That’s why I was surprised at how deeply I responded to a series of philosophical questions posed by the folks at Triyoga in London, where I’ll be teaching at the end of June. As it happens, the key question they asked me was “What is your favourite quote?” I instantly knew the answer.

Even before I was attracted to yoga in my late teens, I had been very curious about fundamental world views. My readings at the time tended toward the mystical as well as the philosophical. As part of my yoga training with the Sivananda organization, I got a big dose of Vedanta and Yoga philosophy, which I continued to study for many years.  In spite of the fact that I ended up teaching the basic tenets of Yoga/Vedanta, I developed deep misgivings about what I saw as the disembodied nature of the teachings. Years later, I stumbled on a quote in the book Philosophy: Who Needs It, by Ayn Rand:

“Humans are beings of self-made soul.”

That one devastating statement shattered any remnants of the mystical thinking I had inherited from my days at the ashram. It awakened me to the fact that the fundamental essence of my being is my own creation, and it belongs to me, and no one else. In other words, my soul is not on temporary loan from god or some great undifferentiated cloud of consciousness. Through the accumulation of the countless free-will choices I’ve made ever since I’ve existed, I have created the kind of person I have become.

The dualistic roots of yoga philosophy can easily reinforce disembodied thinking by reducing a person to two fundamentally incompatible elements: Purusha (consciousness) and Prakriti (physical nature). This is reminiscent of another Ayn Rand quote from her book Atlas Shrugged when she wrote that proponents of the soul-body dichotomy “…have taught man that he is a hopeless misfit made of two elements, both symbols of death. A body without a soul is a corpse, a soul without a body is a ghost.” Similarly, Samkhya (the darshanic partner of Yoga) famously describes a human as a lame man who can see (Purusha) being carried around by a blind man who can walk (Prakriti). By asserting the indivisibility of body and soul, I reject both models.  Humans are not the ghost of a consciousness somehow being carried around by a dead lump of matter.

I’m grateful that the questions sent me by Triyoga for their blog post created an opportunity to consider these and other issues. I’ll be offering a special 90 minute donation-based program while in London: Free Will and The Nature of the Soul: A Philosophical Inquiry with Leslie Kaminoff with all profits going to a favorite charity of mine, The Africa Yoga Project. This will be on Facebook Live too, so we hope to see you there!